The MLTC is part of the Northwest Suburban Spring League (“Spring League”) which offers competitive playing opportunities to players during the weekday morning hours. Each week there is a practice to hone your skills and a match to test them. 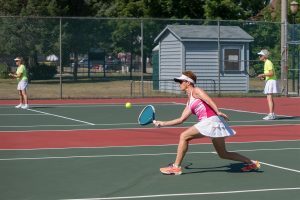 Spring League is a great time to play outdoors after the winter gives way to warmer weather.

Spring team is by far the best bargain for the money. Because of how we orchestrate the drill sessions and the matches, playing twice each week on a spring team is often less costly than playing in a clinic once a week.

Spring teams operate from late April through mid-June. Matches are played on weekday mornings and they are leveled alphanumerically strongest to weakest: A1, A2, A3, B1, B2 and B3.

Because the spring season is relatively short (approximately seven weeks), playing on a spring team can be a nice change from the long indoor season. As with all of our team programs, we have various guidelines to ensure that each season is a smooth one.

Players automatically remain part of their team from year-to-year unless they have requested to be moved to a different team.  In such an event, specific protocols are used.

When there is one opening on a team, the remaining partner may bring in another player of her own choosing.  It is preferred that the prospective player not be a current player from an MLTC spring team (this prevents players from being “poached” from one team to another).  If the partner would like to ask another player from an MLTC spring team, they will need to go through the steps outlined below.  These steps are also needed if there is more than one slot available on a team:

These guidelines have been instituted to create a clear and transparent system that is fair to everyone.

If you have an interest in joining a DBH team, then please contact Susan at susan@marcuslewisenterprises.com.