This can be one of the most overly-complicated decisions that players and parents can make relative to playing tennis. To really understand the answer, it helps to know all of the facts and to separate them from the fluff!

This page is broken down into two main sections: Beginners & Intermediate/Advanced. If you are looking for information about junior racquets, you will find that in the MLTC Junior Tennis Guidebook. Click here to view it. 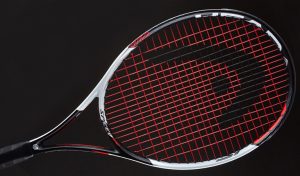 Because the cost of manufacturing racquets has dropped significantly over the years, you can purchase a beginner’s racquet at just about any department store for $50 or less. Most racquets under $30 will be made from aluminum (the cosmetics can make it look otherwise, but it will be heavy to hold when compared with a racquet made from other materials). Although aluminum will work, it is worth the extra $10-$20 for a racquet made of graphite or ceramic materials. It will be lighter and will not warp over time.

For most women, young teenagers and men with small to medium-size hands, choose a 4 1/4 grip. If it feels too small or your hand is larger, then go up to a 4 3/8 grip. For a very large hand, there is a 4 5/8. The grip is an extremely important factor because is represents your connection and control-point to the racquet.

The head size should be between a 95-110 square inches. The larger hitting area will help with ball contact.

Other than those parameters, pick the color you like and have fun!

For a player looking for a higher-grade racquet, this is where it can be complicated and it helps to understand the industry so that you are not taken advantage of by the money and marketing that is involved. Racquets come in a vast number of shapes, sizes, weights, balances and they are constantly sporting the latest/greatest innovation that will supposedly turn you into the professional player you have always dreamed of being.

There are only four racquet dimensions that most players need to concern themselves with:

(Some pros would add “stiffness” and “balance” to this list, but those are much subtler features). 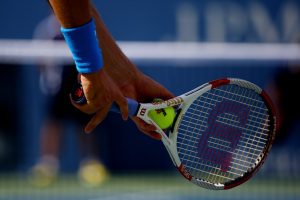 Many touring pros play with mid-size and mid-plus racquets because of the level of control that they get. The downside is that the “sweetspot” of the racquet is smaller and it requires the player to be much more accurate when striking the ball.

For many years, oversize racquets were marketed to your grandfather who can’t move and doesn’t see well, however he somehow manages to win everytime. It was taboo for a professional player to play with an oversize racquet until the late 80’s when Andre Agassi burst on the scene with his 110 oversize frame. After that, companies began making more racquets in the mid-plus to oversize range and pros quickly adopted them. Oversize racquets provide a much larger hitting area which is why they are typically marketed to beginners and intermediates, however they can be a little more “unruly” than a midsize frame.

Super-oversize racquets were made popular to a niche market in the 70’s, however it was more gimmick than substance.

The bottom line is that both intermediate and advanced players can be successful using midsize to oversize racquets.

Weight
Racquets fall into a range of about 8.5-14 ounces. Racquets less than 10.5 ounces are generally considered “light” while racquets over 12 are considered “heavy.”

There are numerous theories as to whether it is preferable to have a lighter or a heavier racquet. We’ll come back to this near the end.

Length
The general length of an adult racquet is 27 inches. There are some that are 27.5″ and a handful of pros have experimented with them, however that extra .5″ can make the racquet much more difficult to control. For 99% of players, stick with a racquet that is 27″ in length.

Grip size
For many years, a 4 3/8 grip was considered the standard grip size, however that is changing. A smaller grip can be more tactile for the player to wield and many pros are switching to a 4 1/4. Most women, teens and men with small or medium-sized hands should consider this option. 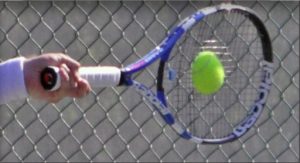 Now that you know the racquet specifications, you need to know how the industry works.

There are a number of racquet manufacturers out there today: Head, Wilson, Prince, Babolat, Yonex, etc. Which one is the best and which one of those racquets in the line is right for you?

The answer to the first question is simple. ALL of those racquet companies sell quality tennis racquets. If a pro is telling you that Prince is better than Babolat or that Wilson is better than Head, disregard it. If this were true, then the top ten players in the world would all play with the same racquet and they do not.

You also need to be wary as to whether or not whoever is giving the advice is sponsored by the company they are promoting. This is an inherent conflict of interest and it is very common. Although our proshop deals in Babolat raquets, the pros do not receive a direct commission for selling the racquet.

The second part of the question about which type of racquet to get takes a bit more explaining. 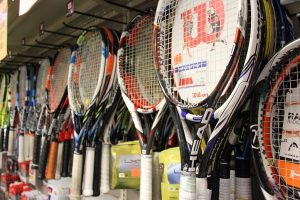 The racquet industry was an environment that was once dominated by a few companies until one of them, Wilson, devised an ingenious strategy for labeling and marketing their racquets that involves the “stiffness” of the racquet. They started taking their new racquets and placing them in a vise where they would add a 6.2lb weight to the head of the racquet to see how it would bend. They measured the amount of bend and then applied it to what they called their “Stiffness Index.” A racquet that only bent 2.7 millimeters had a Stiffness Index of 2.7. This is how they got their Hammer 2.7 racquet. The racquet that bent 6.1 millimeters had a Stiffness Index of 6.1 and hence they manufactured the Pro Staff 6.1. The stiffer the racquet, the more power it generates. The more flexible a racquet is, it supposedly offers more control.

So what did this have to do with anything? It didn’t, at least not until they started promoting the concept that if you had a big swing and if you hit the ball hard, then you would not want a racquet that generated power. Instead you should have a racquet that provides control such as the 6.1. If you were a player who had a short swing and did not hit very hard, then you should use a racquet that will give you more poswer such as the 2.7. This new way of looking at racquets and correlating them with types of swing caught on like wildfire and catapulted Wilson racquets to the top of the industry. Whether it was accurate or not mattered little. The bottom line is that it sold a lot of racquets. It was such a powerful message, that Prince quickly followed suit and added their own “Power Level” rating and Head created their own system as well. To make it easier for consumers to understand, Wilson has since rebranded the Stiffness Index to the “Swing Index” and they have put it on a scale from 1-10.

Now the big question is, is it accurate? Should you try and purchase a racquet based on your swing style? Our opinion is no. It is too subjective to simply say, “Mary, you have a big swing, so let’s match you up with this Dunlop here that is made for big hitters.” If Mary goes out to hit with it and does not like it, guess what? She is not going to play well with it. 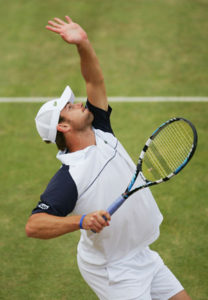 There are also a number of examples at the professional level that completely go against the “Swing Speed” line of thinking. Andy Roddick was one of the hardest hitters in the game, yet he used one of the stiffest Babolat racquets on the market. Pete Sampras was a control player, yet he used a frame that was very flexible. According to the “Swing Speed” guidelines, they should have been playing with each other’s racquet!

Then what is the best way to find a racquet? The best way by far is to play-test a frame. DO NOT take stock in racquet reviews. DO NOT get sold on the latest gimmick (Power Holes, Gel Infused, Copper fibers, Cortex System, Power Structure Technology, etc.), DO NOT buy a racquet because your instructor tells you that it is the best one for you. Instead, play test a racquet.

The MLTC carries a number of Babolat demos that players can try in order to see what works best for them.  If you are interested in a different brand, then Midwest Tennis or Tennis Warehouse both offer great programs whereby you pay a nominal fee (around $20) and they will send you three racquets of your choice in a postage-paid box.