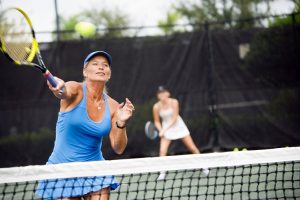 Stepping into a stretch volley.

The Challenger Series League (CSL) program has become the most popular play program in Acton, Westford and Concord alongside our traditional inter-club league play. Participants play a series of 7-9 matches with and against different players at their level. At the conclusion of the session, the player with the most points has the option to move up to the next level the following season.  The CSL originally began as a women’s league; however, we have also created two men’s divisions as well.

Players from various clubs who play at the 2.75 level or higher.  CSL leagues are broken down into divisions based on strength.

What is the schedule?

You can see the CSL schedule by visiting our schedule page and clicking here.

What is the cost?

One key difference with the program is that the practices are optional, so you can participate in only the play portion if you prefer. The cost for each match comes out to being just $23 for 1.5 hours of play.

What is the match format?

Players are partnered with a different player each week and they play against different opponents each week. Two out of three sets are played with no-ad scoring. If the 1.5 hour match time expires before two sets have been completed, then the team with the total greatest number of games won is declared the winner of the match. The same is true if sets are split, and the third set has not been completed.  Scores are entered into the MLTC’s Universal Tennis Rating (UTR) system.  Click here for more info on UTR which has become the standard in knowing your level in tennis.

Each week, scores are recorded using the following system:

The MLTC believes in friendly competition 🙂

What are the advantages/disadvantages?

A great shot of going after the high volley.

The advantages are substantial:

1. No traveling!
2. Your match times will be known well in advance (they can vary greatly when playing against other clubs).
3. Practices are optional.
4. No more coordinating with other clubs about times, places, weather, etc.
5. The levels will be consistent since they are regulated by our organization.

About the only disadvantage is if you wanted to play with the same player all the time. In this instance that will not happen; however, the beauty of playing with someone different each week is the potential to meet other players and to possibly find others with whom you may have great chemistry.

How will the points be used?

Whoever has the highest point average will have the option of getting bumped up to a higher division.

How do I register?

Please contact Susan at susan@marcuslewisenterprises.com or call her at 978 795 4028.

Some players are doing this in addition to playing in their inter-club matches while others are doing it in place of those programs. The CSL is a great opportunity to meet players from other programs, receive feedback at all of your matches and play in an environment without any politics or extraneous distractions!